Recycling machinery manufacturer MUNCHY has reported a significant rise in the level of enquiries from processors wishing to recycle their scrap and waste materials into pellets that can be re-used back into their production operation. The company is conducting a higher number of material trials for customers and as a result the number of orders for recycling systems is greater than this time last year. After lengthy discussions with a wide range of processors from around the world MUNCHY can state that the main contributory factors to this increased interest in recycling is due to the heavy rise in production costs mainly caused by the price of polymer, rising energy bills and increased transportation costs. With machine payback in approximately one year or less in some cases, processors are making the investment now in order to remain competitive.

MUNCHY President Simon Brookes states " We have experienced an increase in enquiries from a much wider sphere of applications and industries than those traditionally associated with recycling. Companies from all markets and sectors now recognise the importance and value of gaining maximum return and profitability in all of their operations. An investment in a recycling unit was seen as secondary to that of production equipment but recently organisations have realized there is a real cost saving to be made through recycling and are making the investment now. Until recently organisations were happy for much of their scrap to be collected or even paid for it to be collected. Now they are looking to utilise that scrap to its full potential and make savings.”

The launch of Muncher has also been a contributory factor in enabling organisations to maximise their full scrap potential. The Muncher’s ability to recycle a wide range of material forms makes it more appealing than ‘traditional recycling systems that were aimed primarily at the blown film and sheet industries. Manufacturers that have bags, bales, ropes, non-wovens, EPS, sacks, etc can reprocess this scrap waste into high quality grade pellets for utilisation in the main production operation. The Muncher is also easy to clean and therefore allows for a number of differing materials and polymer blends to be reprocessed without the fear of cross-contamination or lengthy clean down.

MUNCHY Recycling Systems are capable of reprocessing a wide range materials and material forms with outputs of 8 to 1,250 Kg/hr. 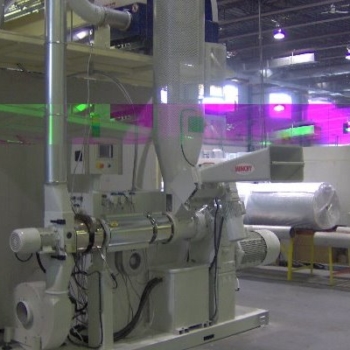